#LakeAtitlanHotels like Hotel Mikaso, Casa Atitlan (formerly Hostel Jarachik), Hostel Zoola and Maya Moon Lodge are some of the top hotels in Guatemala, thanks to their location on beautiful Lake Atitlan. 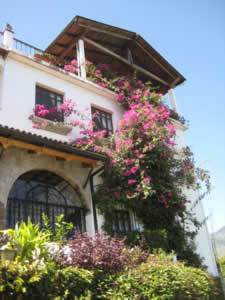 For more info on hotels and hostels at Atitlan, see Hotels at Lake Atitlan.

The party takes place on March 22 in Santiago. Musicians from around Guatemala and beyond will be playing at Posada de Santiago and other venues in town. It’s all all-day event, with boats from Panajachel direct to the Atitlan Music Festival.

Green, green, green from one side of Lake Atitlan to the other, this St. Patrick’s Day (March 17), when the top place to party in San Pedro la Laguna will be The Clover Restaurant on 7th Avenue. The Clover is the only Irish tavern at the lake, so arrive early and party late.

On the way, get warmed up for the festivities at El Barrio Bar, Naked Sushi, Hostel Zoola, Hotel Mikaso and Casa Atitlan on the East Side, and Alegre Pub, Bar Fe and Fifth Dimension in the zona viva. Early birds: best daytime bar action will be at The Deep End Bar and Pool, The Blue Parrot Bar and Grill and Alegre Pub.

In Panajachel, celebrate St. Patrick’s Day at Circus Bar and Cafe Atlantis. Like most places, they will have live music or DJs. IslaVerde — “green island” — is the place to go in Santa Cruz, while the folks in Santiago will be at Cafe Quila’s and Posada de Santiago.

There will be parties all over Guatemala for the Day of the Dead, and they have already started today, Halloween. Officially Day of the Dead — Dia de los Muertos — is celebrated on November 2, but it’s really a three-day event. Look for fiambre, the official food of this important day in the culture of ancient Mesoamerica as well as Mexico and Central America.

Semana Santa in March this Year

There will be parades, fiestas and ceremonies all around Lake Atitlan for Semana Santa. Tbe big day is Good Friday on March 29- If planning to see the main event in Santiago, with Maximon and Christ, be sure to make hotel reservations right away, as the hotels fill up quickly and you have to spend the night to see the entire show.

There’s a New Year’s Eve dinner from 6-9 PM at Cafe la Puerta, with choice of three gourmet entrees for Q65. A few steps down Seventh Avenue from this restaurant, El Barrio’s bash has an open bar (with wrist band) from 9 PM to midnight, with live music and drink specials.

In the zona viva, Alegre Pub’s New Year celebrates the ringing of Big Ben at 6 PM, with live video from London. Live music from 6:30-8 PM, and the official New Year’s Eve party at 9 PM with DJ Freddy.

Dinner at 7 PM with seven small courses accompanied by three wine. Vegetarian options available. The Ravioli filled with Lobster and Bleu Cheese on a Fresh Tomato-Herb Sauce and Covered with a Creamy Garlic-Parmesan Sauce sounds incredible! Also Beef Tenderloin with Chipotle Béarnaise and amazing side dishes and desserts. Plus a boat ride at 11:30 to view fireworks. Q350, or Q50 just for boat ride.

A recent story in Guatemala’s El Periodico reporting that over-the-counter marijuana sales will being on January 15 in four provinces proved to be a joke. It came out on December 28, Day of the Innocents, which is the local version of April Fool’s Day.

However, the President continues to lobby for legalization of drugs for commercial growing and sales, both in Guatemala and other Central American countries, and has even done so at the United Nations. While marijuana remains illegal, the laws against possession of small amounts are rarely enforced at Lake Atitlan and other parts of Guatemala, as long as people don’t smoke openly.

Where to Eat Christmas Dinner at Lake Atitlan

This will be updated as breaking news shatters the picture glass window in the How Am I Going to Get Out of Thi Situation Room.

Semana Santa festivities start March 22 and last through the 29th.March 22, 2014